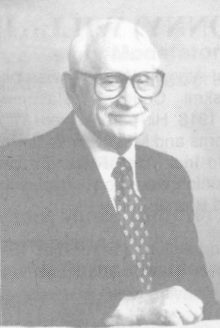 Beloved Brethren, messengers, and friends. Once again at the direction of our respective churches we have set in joyful association for fellowship and counsel, and to make such recommendations as we deem proper and profitable to our churches.

The Apostle Paul called the Lord’s church (any New Testament Church) “the pillar and ground of the truth” (I Timothy 3:15). We bear a particular responsibility in respect to the inspired truth of God, unlike that of any other people on earth.

The question propounded so long ago looms importantly before us today, “If the foundations be destroyed, what can the righteous do?” (Psalm 11:3)

Society is undergoing a change from the order that we have known for so long. So-called new moral concepts have all but destroyed the foundations of decency which have meant love for home, respect for country and obedience to laws.

Religion is undergoing a change and old foundations are being abandoned. Predictions are made almost daily and printed in newspapers predicting the demise and disappearance of churches as congregations within the next few years. Independent Bible classes, evangelistic associations, and other independent groups sponsoring missions separate and apart from any church relationship are springing up every day.

Though we must at present speak in general terms, foundation principles must be sought out and adhered to faithfully.

The problem facing Missionary Baptist churches stems from three prevalent things: (1) The general acceptance of the universal church idea, (2) The ecumenical spirit of the age, and (3) The influence of a biased press, radio, mailed propaganda, and misinformed personal friends.

Let us be zealous to reaffirm our belief in the local character only of a New Testament church. This is the foundation principle for Christ-honoring service to God. A false sense of ecumenical brotherhood has lessened the force of Ephesians 3:21 “Unto him be glory in the church by Christ Jesus through all ages, world without end.” That sets forth Christian service in church relationship and Christian activities centered around a local New Testament Church.

Let us reaffirm our belief in a doctrinally separated church position in the world. The grand doctrines of the Bible have been weakened by the prevailing spirit of “compromise for the sake of Brotherhood.” The Lord’s churches have been charged with teaching the “Whole counsel of God” and the “all things” which Christ has commanded. Each doctrine is important and must be equally emphasized that our churches may not become lopsided and little more than Protestant evangelistic centers in practice on one hand, nor dead pillars of orthodoxy on the other.

Let us reaffirm the principle of associated work among New Testament churches. We must disregard the trend of the day toward mergers, unionization, add centralization, and ever guard the independency and authority of local New Testament churches under God. No messenger body has any authority over any New Testament church and any concept of such authority must continually be rejected. The association is the churches. Messenger meetings can only make recommendations and offer counsel. There is no higher court of appeal than a local Baptist Church.

Let us continue to contend for the right of churches to associate and make use of messengers and committees after the New Testament manner as they see fit.

Let us preach the gospel and reaffirm all the age-lasting doctrines and principles laid down in God’s Holy Word. This is necessary if the Lord’s churches are to survive, AND SURVIVE THEY WILL, UNTIL HE COMES AGAIN: Jesus said, ” …and upon this rock I will build my church; and the gates of hell shall not prevail against it.”  (Matthew 16:18)

Update Required To play the media you will need to either update your browser to a recent version or update your Flash plugin.